Jenni Fletcher was born in Scotland and now lives in Yorkshire, where she writes historical romance novels ranging from the Roman to Victorian eras. 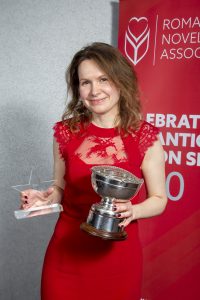 She studied English at Cambridge University before doing a PhD on Edwardian literature at Hull. She then worked in a variety of administrative jobs while trying to finish her first book, which was rejected. Thinking there must have been some mistake, she then wrote another, which was fortunately accepted by Harlequin Mills&Boon

She spends a large part of her day obsessing about things like the Oxford Comma and whether she uses exclamation marks too often (she does!) while getting distracted by Twitter (you can follow her @JenniAuthor). The rest of the time she drinks too much caffeine, eats too much chocolate, and teaches creative writing. She has been nominated for 4 RoNA awards (for Historical and Short Fiction), and won the Libertà Award for Short Romantic Fiction in 2020. Her favourite Jane Austen novel is Persuasion and her favourite Brontë is Anne. If she had to choose a romantic hero it would be John Thornton, probably just because she’s Northern.