I’ve written several blogs about what inspired my own interest in the Roman era, but I’m not the only Harlequin / Mills & Boon author who finds this period of history fascinating. Michelle Styles and Greta Gilbert have both already written some brilliant Roman-set stories. They’ve both generously agreed to write on my blog about what inspired them and why we think Romans are due for a comeback! 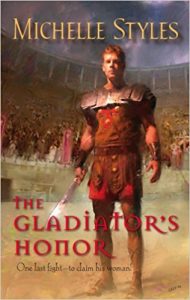 Over a decade ago, Harlequin/ Mills&Boon published its first Roman set historical, The Gladiator’s Honour. Harlequin then went to publish a few more Roman set romances (four of them were mine). They were published all over the world, with well over 250,000 copies of my books being sold.

For a number of reasons, I started writing other eras and my Roman set ones sort of fell by the wayside, except every so often readers would bring them up and say with a wistful note in their voice — ‘But I really loved your Roman set books’ or ‘Gladiator’s Honour is on my Keeper shelf’ and once very memorably in a lift at a RWA conference — ‘Are you THE Michelle Styles who wrote Gladiator’s Honour? I loved that book.’ Happily, two other authors Greta Gilbert and Jenni Fletcher have taken the era to heart and are producing wonderful Roman set historicals.

Why do I think the period is relevant? Because historical fiction is a way to throw up a dark mirror to today’s world. Roman civilisation provides great opportunity to explore certain themes. The US Founding Fathers deliberately modelled the US on Rome, but I think even they would be surprise with some of its parallels.  Rome was a society that was both hugely civilised and uncivilised by today’s standards but when you studied its history, you find everything we are going through, including Fake News etc so it can resonate with readers. You also have a society which was in a constant state of flux with changing roles for men and women as well as the little accruements of a civilised life such as indoor plumbing, combined with real hero worthy material such as gladiators, charioteers, legionaries etc and an appreciation of strong intelligent women. In short, I think you have an era which is ripe to take its permanent place in the Historical Romance cannon, particularly with such talented authors penning stories set in it.

I would like to say that what initially drew me to ancient Rome was its socio-political similarity to modern society. But really, it was the men. Specifically, three sexy, tortured heroes who have graced TV and movie screens over the past few decades and lodged themselves in my very soul.

The first is Titus Pullo, one of the two lead characters in the HBO series Rome. Pullo is a violent, hedonistic strongman who slowly develops a conscience. When he finally finds real love, it is pure, bone-melting redemption. The next is Spartacus from the Starz series of the same name. Spartacus is enslaved and forced to become a gladiator, then slowly gets his revenge, his honor matched only by the quality of his abs. The third is Maximus from the movie Gladiator. Maximus, the general-turned-gladiator-turned-martyr, is so heart-wrenchingly loyal (to his wife, to Rome), that you just want to hug him!

These heroes must navigate a world of incredible inequality, brutality, greed, pluralism, consumption, and interconnectedness–in other words, a world much like our own–and somehow make sense of it. I think that is why they are so inspiring to me (well, that and their fantastic abs), and why I think ancient Roman romances are due for a comeback!

A huge thank you to Greta and Michelle for blogging with me – they can both be contacted on Twitter @MichelleLStyles @GretaGilbert – and look out for Greta’s next book In Thrall to the Enemy Commander, out next month!