The fourth and final book in my Regency Belles of Bath series is almost finished. It’ll be sad to leave my biscuit shop on Swainswick Crescent behind, but now that Anna, Henrietta, Beatrix and Nancy have found their HEAs, it’s time to move on.

BUT just in case, you don’t know who I’m talking about, here’s an extract from my personal favourite (so far) Unexpectedly Wed to the Officer… 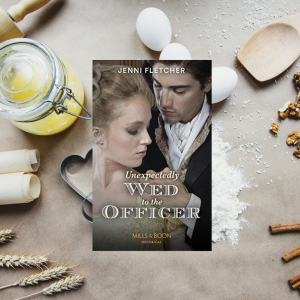 The door hit Sebastian Fortini squarely on the nose.

It was, he considered, a case of monumentally bad timing. If he hadn’t been looking sideways, wondering why the dresser that had spent two decades in one particular corner of the kitchen had suddenly moved to the wall opposite, then he wouldn’t have turned so sharply at the creak of a floorboard in the hallway, which meant that the door, when it opened, would have had only its own and not his additional impetus to wield against him. But unfortunately he had, and he was, so it did.

If only the chain of catastrophes had ended there…

Alas, his nose proved to be just the first victim as the full and somewhat considerable weight of a heavy oak door being violently rammed rather than gently pushed open knocked the rest of him off his feet and into an inelegant heap on the floor.

Between the impact of the wood on his face and the stone flagstones on his posterior, it was actually difficult to tell which was the most painful, a fact that did nothing to curb the flow of expletives that immediately burst from his lips, which appeared to be coated in some warm, sticky substance.

He reached a hand to his nose, felt blood and sucked in a breath, readying himself for a fresh burst of eloquence, when a female figure suddenly sprang out of the darkness of the hallway, armed with what appeared to be the contents of a coal bucket.

Sebastian raised himself up on his elbows, squinting at his attacker through the murky flickers of light cast by the still-glowing hearth. Unexpected as it was to find himself being threatened in the dead of night by a shovel and pair of fire tongs, he was frankly more perplexed than alarmed. His sister’s voice, he was further surprised to notice, had developed something of a west country burr in the two years since he’d last been home on shore leave. More bizarrely, she’d grown in height, too. In fact, her whole appearance had undergone some kind of radical transformation…

‘What the blazes?’ He drew his brows together, belatedly acknowledging that she was not, in fact, his sister after all. Not unless the blow to his head had affected his sight, which seemed unlikely since there was nothing blurry about the vision of golden loveliness before him. She was about as different in appearance to Anna as it was possible to be—willowy, golden and, at that moment, clad in a white nightgown short enough to reveal a pair of slender, shapely calves and positively minuscule ankles. In other circumstances he might have been quite delighted to find himself lying beside them. Unfortunately, she’d just knocked the sense out of him and the words racing through his mind were a great deal less than charitable. Ankles be damned, his nose felt as though it was about to explode.

‘Oh!’ She started forward at the sight of blood and then checked herself, jerking her chin upwards and scowling defiantly instead.

‘You might give a man some warning when you’re about to open the door.’ He scowled back, clenching his jaw against the impulse to swear some more. He’d barely scratched the surface of his extensive sailor’s vocabulary. ‘I think you just broke my nose.’

‘Good!’ Her grip on the shovel only tightened. ‘That’ll teach you to break into people’s property in the middle of the night! Now get out or I’ll scream for the night-watchman.’

‘Wait!’ He reached into his jacket pocket and pulled out a handkerchief, waving it in the air like a flag of surrender before using it to wipe the blood off his face. After two days of travelling in a series of cramped stagecoaches from Plymouth, the last of which had arrived three hours late thanks to a loose wheel, being hit in the face by a door wasn’t the welcome home he’d been hoping for, but, injured party or not, the last thing he wanted was to be hauled off to gaol in the middle of the night. ‘I didn’t break in. I have a key and I was trying not to make any noise, if you must know, only things seem to have moved around since I was last here.’

He threw another speculative look around the kitchen. The pale yellow walls, oval-shaped oak table and threadbare armchair by the hearth were familiar, but actually quite a lot had changed since he was last there. To begin with, there was the broom he’d knocked over when he’d opened the back door, then there was the sack of flour he’d stubbed his toe against, then a set of shelves he definitely hadn’t seen before, not to mention the dresser… Presumably his sister had decided to move a few things around, but where was she anyhow?

‘Where’s Anna?’ He cocked his head to one side enquiringly.

‘You know Anna?’ The woman blinked, apparently surprised enough to lower the shovel a few inches.

‘All my life.’ He glanced from her face to her makeshift weapons and then back again. It didn’t seem as though she had any real intention of using them, but considering the various sharp edges and their potential uses, it was probably best to be sure.‘By the way, would you mind putting those tongs down? I’m afraid to ask what you intended to do with them, but they’re making me want to cross my legs.’

His lips twitched as a furious blush spread across her cheeks. Now that the pain in his nose was receding, it occurred to him that if he really had to be hit in the face by a woman, then she might well be the one he would have chosen to do it. Even scowling and wielding a pair of tongs, she was quite stunningly pretty. Beautiful in fact, with delicate, elfin features set in a peaches and cream complexion, albeit one that was currently claret-coloured.

‘No!’ She was adamant despite her embarrassment. ‘Not until you tell me how you know Anna.’

‘Well…’ He braced his hands on the floor, pushing himself to his feet so abruptly that she leapt part way into the air, the tongs wobbling precariously in her grasp. ‘I believe that we first met in the cradle. She used to sing me lullabies, as I recall. Allow me to introduce myself. Sebastian Fortini, at your service.’

‘The one and only.’ He winked and made an elaborate bow, enjoying her gasp of surprise as he flourished the now bloodstained handkerchief out in front of him. ‘As for you, I can only assume that you’re a figment of my imagination caused by the blow to my head.’

‘Oh, dear.’ A horrified expression crossed her face. ‘Sorry about that. I really thought you were a burglar.’

‘Quite understandable.’ He lifted his shoulders, conceding that it was, in fact, entirely understandable since he hadn’t sent any advance notice of his arrival. There hadn’t seemed much point when he could travel in person just as fast as a letter, but then he hadn’t reckoned on his coach’s late arrival. That had struck him as somewhat unfortunate, coinciding as it did with the middle of the night, but he’d assumed that he could simply let himself in, sleep in the armchair by the hearth and wait to surprise his sister in the morning. What he hadn’t expected was to trip over half the kitchen furniture and wake anyone else up.

‘My name’s Henrietta Gardiner.’ The woman placed the tongs and shovel down by the hearth and clasped her hands together primly in front of her.

‘Delighted to meet you, even under the circumstances.’ He suppressed a smile at the primness. There was something charmingly incongruous about it when she was standing in front of him wearing nothing more than a white nightgown, particularly one that, whilst not exactly sheer, did only a partial job of concealing the luscious curves beneath. He allowed himself a few seconds of appreciation before pulling his gaze reluctantly back to her face. ‘So, Miss Gardiner, has my sister employed you to guard the shop against night-time marauders?’

‘Not exactly. I’m the new manager.’

‘Manager?’ He forgot instantly about the nightgown, seized with a rush of panic. ‘Why is Anna employing a manager?’

‘Because she’s—’ She stopped mid-sentence, regarding him askance. ‘Wait, didn’t you get any of her letters?’

‘No. My ship’s been stuck out in the Pacific for the past year. I haven’t heard anything from home in the whole time. What’s happened?’ He took a step forward impatiently. ‘Is she all right? Has something happened to our mother?’

‘Oh, no, everything’s all right. They’re both perfectly well, only—’ She stopped for a second time, sucking her bottom lip between her teeth in a way that made him acutely conscious of her nightgown again, ‘I think I’d better put the kettle on. Are you hungry? There are some leftover biscuits somewhere.’

‘You mean Belles?’ He pulled a chair out and settled himself down at the table, feeling relieved by her assurances. The thought of one of his family’s famous biscuits was comforting, too, telling him he was finally home at last. ‘I can’t remember the last time I had one of those. I hope Anna hasn’t been messing around with the recipe.’

There was a conspicuous pause before Miss Gardiner answered, a glint of amusement in her eye as she deposited a plate of biscuits on the table in front of him. ‘You might be surprised by what Anna has done. Welcome home, Mr Fortini, we have a lot to talk about.’